The legacy of Vogel’s & Foster’s, one of the oldest department stores in the country, began 130 years ago with the successful entrepreneurship of Harmon S. Holmes. From his arrival in Chelsea in 1872 at age 18 to work for and eventually partner with Thomas Wilkinson in his dry goods store, until his retirement in 1915, Holmes was involved with the development of local businesses in Chelsea selling general merchandise, clothing, hardware, furniture, farm implements, lumber, and produce. He also was heavily invested for many years with Chelsea’s first commercial savings banks. Holmes later became involved in what was to become Chelsea Milling Co., a lasting venture handed down through four generations.
Holmes, along with his partners, were the first tenants of these Commercial Victorian style buildings on a site originally occupied by a early village wagon maker J.L. Harlow. The first building at 109, was built by local builders Maroney and Monroe in 1876 for business merchant and town supervisor, David Thomas. A year later 107 was built on the site when Holmes established a partnership with a local doctor who owned the previous wood structure destroyed by fire. Orange Stone did the mason work and the firm of Negus and White furnished the lumber and did the joiner work. Architect L. D. Grosvenor of Jackson furnished the plans and specifications.

By 1887 Holmes owned both structures, and remodeled them to function as one store by removing two front interior staircases, and adding an interior archway.

In 1911 the south building was extended to match the length of the other, and a water fountain was added at the archway, which is still there today

Holmes installed a typical feature of early department stores with numerous employees. An 1880’s state of the art “Lamson Cash Carrier” system ensured proper accounting at the registers. It utilized a basket on a cable pulley to take cash from the sales counters to the bookkeeping offices.

Originally, the north building housed Dry Goods and Groceries, while the south building housed Clothing. Carpets and Shoes were sold upstairs. Two of the renters occupying the upstairs were Ernest E. Shaver’s “Eureka” photograph gallery from 1877 to 1918; and Nellie Maroney’s and Ella Craig’s millinery (hat) shops in the 1880’s and 90’s.

In 1885, Holmes took in a new partner, W. J. Dancer to form H. S. Holmes & Co., and began to expand his operations to other towns as well including Stockbridge and Northville. In 1893 he reorganized the business again as H. S. Holmes Mercantile Co. using his newly promoted officers, Ed Vogel and Dallas Wurster to help run it until his retirement in 1914. The business was sold to them as a partnership the following year and the name was then changed in 1917 to Vogel and Wurster, for which at the time was specializing in only clothing.

When Ed Vogel died in 1933, his daughter Helen Vogel took over his role. Helen and Wurster split the business in 1945 with the north store for women’s clothing, naming it Vogel’s. The south store was for men’s clothing and Wurster took in a new younger partner, Bob Foster who was hired after WWII. The men’s store was then named Foster’s Men’s Wear in 1950 after Wurster’s death.

Helen Vogel and Bob Foster are fondly remembered by many Chelsea residents. Helen had few display racks in her store, and served her customers out of individual storage boxes. She had a keen eye for selecting correct sizes, and suggesting matching accessories. Bob Foster was known for his kind manner and utilizing the recreational clay horseshoe pits in the basement.

Jack and Friedelle Winans bought the Vogel’s store when Helen Vogel died in 1973. Bob Foster retired in 1977 and sold the Foster’s store to Winans who reunited the two stores as one business as it was 100 years before. Winans’s continued to offer fine clothing for the entire family under the name of Vogel’s & Foster’s, Inc.

Current owner Mike Jackson purchased the business in 1994, and later the two buildings. Jackson inherited the old creaky hardwood floors, and kept the ambience of an old-fashioned clothing store, but brought in new popular name brands of shoes, accessories, and clothing.

-Thank you to the Chelsea Historical Society 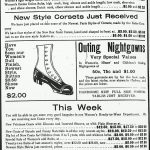 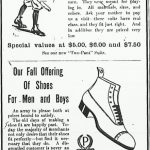